Sahanara Khatun, daughter of Abdul Gaffer Lasker was an out of school girl till IIMPACT touched her life. She lives in the tiny village Patra and was married at the very early age of thirteen. Her husband works in a distant town and Sahanara continues to stay with her parents.

Being faced with such a case for the first time IIMPACT had to counsel both her parents and her in-laws about the negatives of marrying at such a young age and the effects it would have on their daughter. It took a while but the team finally convinced them all about the importance of educating each of their daughters. Sahanara’s parents were persuaded to send Sahanara as well as their other daughters to school. They have agreed that they will not get their younger daughters married at such an early age.

The parents and in-laws were shown the school and introduced to the way in which daily classes were conducted. They were encouraged by what they saw.

Today Sahanara has been coming to the centre for the past year and is at present studying in class II. Her younger sisters will soon be joining Sahanara at the IIMPACT learning centre. 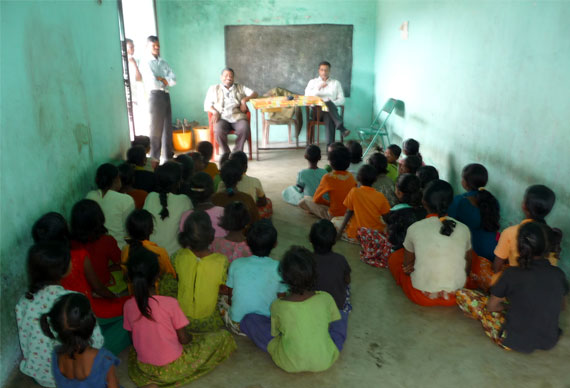 Zeenat Khan is a ten year old girl who belongs to a completely uneducated family. Zeenat was enrolled at the IIMPACT learning centre ‘Deepak’ in Rajasthan.

It is Zeenat who has helped introduce the light of education into her household and has now made education an integral part of the family members’ lives. Zeenat’s positive outlook was not always previously to be seen.  In the early days at the centre,  Zeenat’s attendance proved to be irregular and her attitude towards work a bit tardy. Upon delving into her background and family history her teacher- Om Prakash- found that though Zeenat herself was actually very keen to gain from education, the rest of her 7 member, completely illiterate family did not think education was important enough for anyone (particularly a girl ) to neglect her household chores.. Rather it was felt that education would come in the way of housework and of the well being of the family at large.

Zeenat’s family had never considered education as an option since this was an idea completely foreign to them. Despite the teacher’s many secret reservations about being able to successfully convince this family to allow Zeenat to make the Learning Centre a part of her daily life, .the teacher remained persistent. He involved the local community members to help try and convince the parents about the importance of education and to explain to them that it could in fact change their lives forever.

These external efforts not only succeeded in making Zeenat even more determined to study in the face of opposition within her family, but finally also got the parents and other siblings to see the relevance of what Zeenat was trying to be part of.   Now Zeenat not only goes regularly to school but also carries back homework with her. By the dint of her hard work and sheer determination Zeenat has within a time frame of 2 years and 7 months managed to successfully complete the class 5 exams and has now  moved on to class 6 in the local government school. As a result of this influence her 2 younger brothers have enrolled in the local school and her parents are now convinced about the significance of education within every family.  Her parents recognize the fact if Zeenat had not been so adamant about going to school her entire family would have remained in darkness.

Babu Sameedullaha and his wife Khaleekum would never have dreamt that their daughter Ashma would ever go to school. Her life and future had always promised to be bleak and dismal. Abu had injured his hand in an unfortunate accident and is not capable of working with his hands, leaving his family extremely poor.

It was when IIMPACT set up its Learning Centre in their village that its teacher Sabiha reached out to prospective students and laid eyes on Ashma. This young girl had a unique problem – she had been struck by polio in her early childhood. She could only walk by dragging her feet, finding it challenging to travel any distance. This did not deter Sabiha from approaching Ashma’s parents and introducing them to the IIMPACT program. Ashma’s parents were initially reluctant but finally agreed to send their daughter to school.

Today, it is wonderful to see Ashma arrive at the centre before anyone else on her wheelchair (pushed by her sister), which was presented by a donor in order to enable her to travel to and from the Learning Centre. She is a dedicated student who has the distinction of not having missed a single day of school since the very beginning. 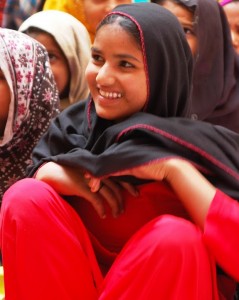 Rubina Khatoon is a bright girl from one of the learning centers sponsored by ING-Vysya. She was identified by our local team in Mehmoodabad as we were planning to award our girls for their outstanding performance.

When Mrs. Khatoon,, Rubina’s mother, came to know about our visit, she came and spoke to us. She told us that her husband died 10 years back and that she has no source of income. It was impossible for her to even think of educating her 3 children when she has barely anything to eat? She was ecstatic when she heard about the opening of learning center in her village. She also mentioned that she does not send her daughter to her mother’s place because it would force Rubina to miss her classes. According to her Rubina has learnt a lot and she now teaches her younger brothers at home too. Mrs. Khatoon is illiterate and does not know how to read and write but her daughter now does all the calculation work. Rubina keeps the account of the money she earns from working in the fields. She said ‘I thank ‘Allah’ everyday for setting up an IIMPACT learning centre near my house.’ She said ‘My present is dark but my future looks bright. I will not marry my daughter until she is an under-graduate”. These words touched the hearts of all those